I’ve arrived in Córdoba and am fully emerged in the culture of Andalusia. I have to admit, it has been a relief to be able to wear “regular” clothing again, to efficiently converse with taxi drivers, as well as visit a few of my friends.

Yesterday I made my way to Sevilla where I met Narci, an old family friend. Narci helped me get in contact with Nara, an 18 year old Moroccan who currently resides in Spain.

Together we all sat down to have a conversation about Nara’s life in Spain, with Narci acting as an excellent translator when needed.

Getting to hear from Nara (who could speak no Spanish when she arrived, but now speaks it fluently), was probably one of the most gratifying experiences I’ve had on my trip. It is one thing to read about migration stories, but another to have someone explaining their own life story and the difficulties they overcame.

When Nara was 17 years old, she and her mother took a trip to Spain. They were permitted a three month visa, and when this time was up, Nara’s mother gave her a choice: to go back to Morocco or stay in Spain.

(Nara is the second person ((the first being a guy working at the Tangier hostel)) who brought up an interesting part of the Spanish law in conversation. From what I gathered, if one is Moroccan and in Spain as a seventeen-year-old or younger, they’re allowed to stay after their Visa expires and get “papers.” However, if they’re 18 or older, they have to return to Morocco once their Visa expires).

Obviously, Nara chose to stay in Spain. When she told me this story, I was absolutely flabbergasted. I know at 17 years old I would not have had the maturity to leave my family for my own benefit, let alone live in a country where I didn’t speak the language. When I asked her why she chose to leave Morocco, she told me that she wanted the opportunity to work after high school, have more equality to men, and be able to retire with financial security. She said that in Morocco once women get married, “no hacen nada,” and continued to state that in some parts of Morocco, wives cannot go to the police if they are being abused by their husbands.

Nara was from Tangier, the city I was just in, and perceived to be rather socially liberal. However, Nara offered me a new perspective I could not have developed as a negligent tourist about the true reality of female Moroccans.

Now Nara lives with her aunt, but while she was a minor she had to live in a home with other children whose parents couldn’t care for them for various reasons. Nara said she was the only girl in her house while she lived there, that she wasn’t allowed to use her mobile phone (a policy of the house to protect the children), and that she was only allotted 10 minutes a week to call her parents back in Morocco.

Getting to speak with Nara was extremely humbling, and also made me feel so lucky to have grown up in a country where I’m allowed to pursue an international research project at 19 instead of being a married housewife.

For the rest of my day in Sevilla, I strolled through the old town feverently searching for a particular necklace Ceci wanted in 94° weather (to no avail), and also made paella with Narci.

I pulled the spine out of squid, diced up some tomatoes, and burnt my tongue trying to taste whether the paella had enough salt all under the careful watch of my wonderful teacher Narci. I’m proud to say nothing caught fire, no one got food poisoning, and the paella even tasted (in my non bias opinion) spectacularly rica. 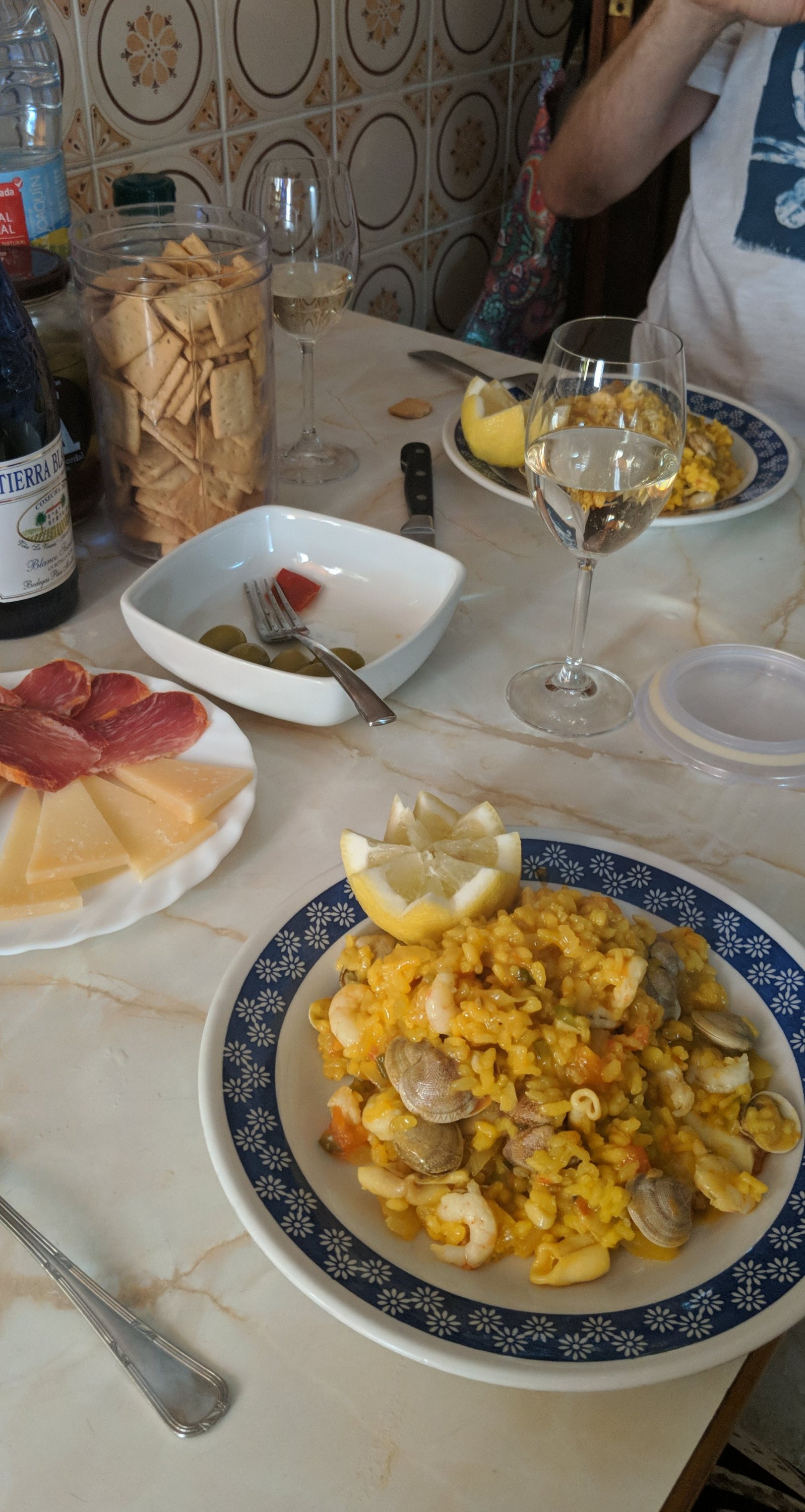