Skip to content
After sleeping in a surprisingly cool room, I woke up to a lavish breakfast provided by the hostel. I have no idea what I ate, but I felt full enough to go the rest of the day without eating (which I essentially have to do because it is currently Ramadan). Along with the lavish meals provided by the hostel, another perk is that there are several kittens running around, and five turtles that have a knack for ending up right in your walking path and under your feet. 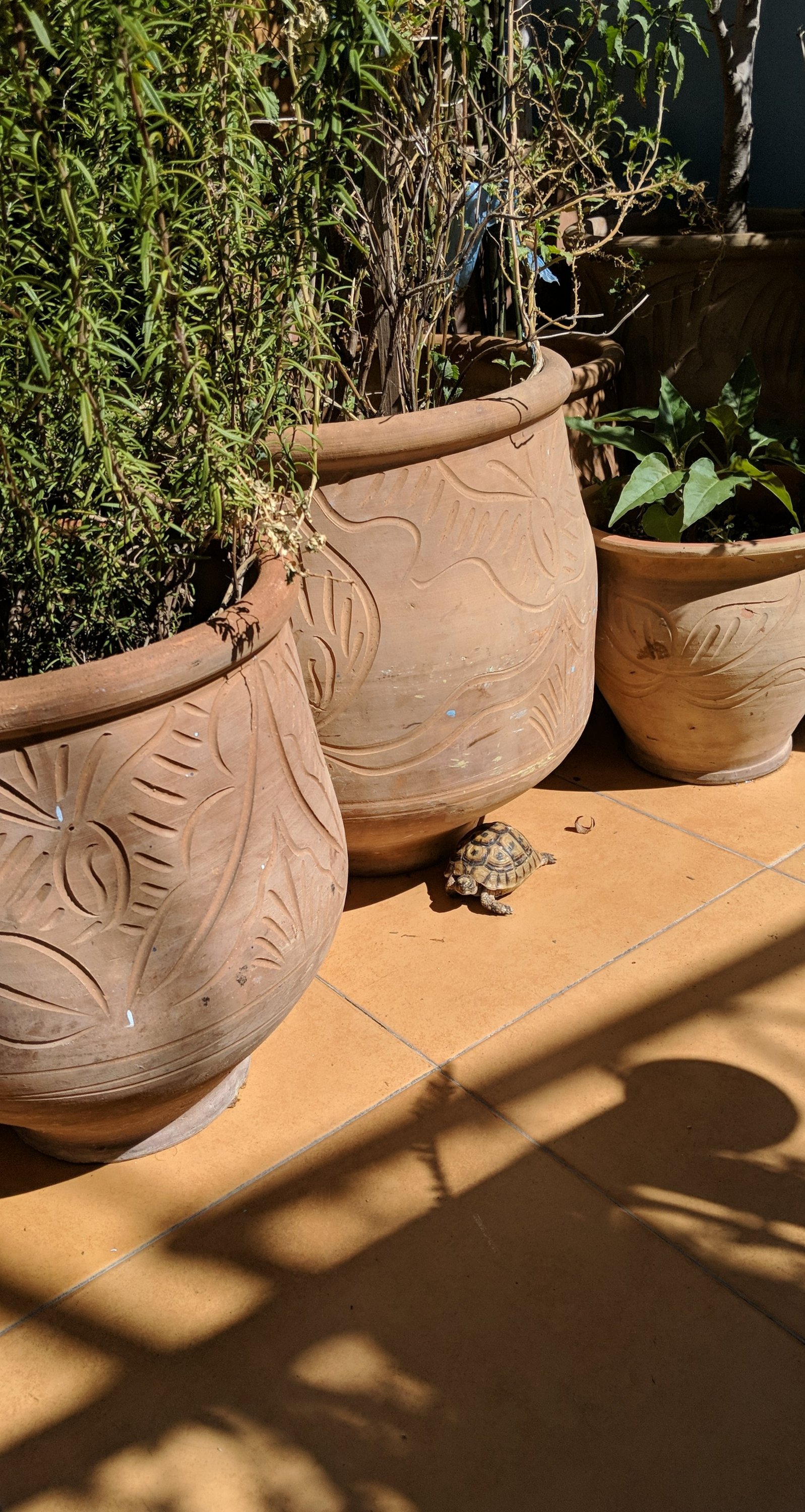 The hostel arranged for a local guide to show me around the Medina (the super old part of Fez) and for only about $25 I got a four-hour personal tour. This price gives you an idea of the price difference in Morocco vs. Europe, where I’d have to pay hundreds of dollars for the same tour.

My tour guide, Muhammad, first brought me to one of the two main streets in Old Fez. After walking through twisting and winding roads for only five minutes, I was already lost. Some of the roads we took were not wide enough for two people to walk side by side, others were covered in water, making the stones slippery (though apparently only for me, because Muhammad never slipped once), and on other roads we were dodging donkeys and motorcycles. 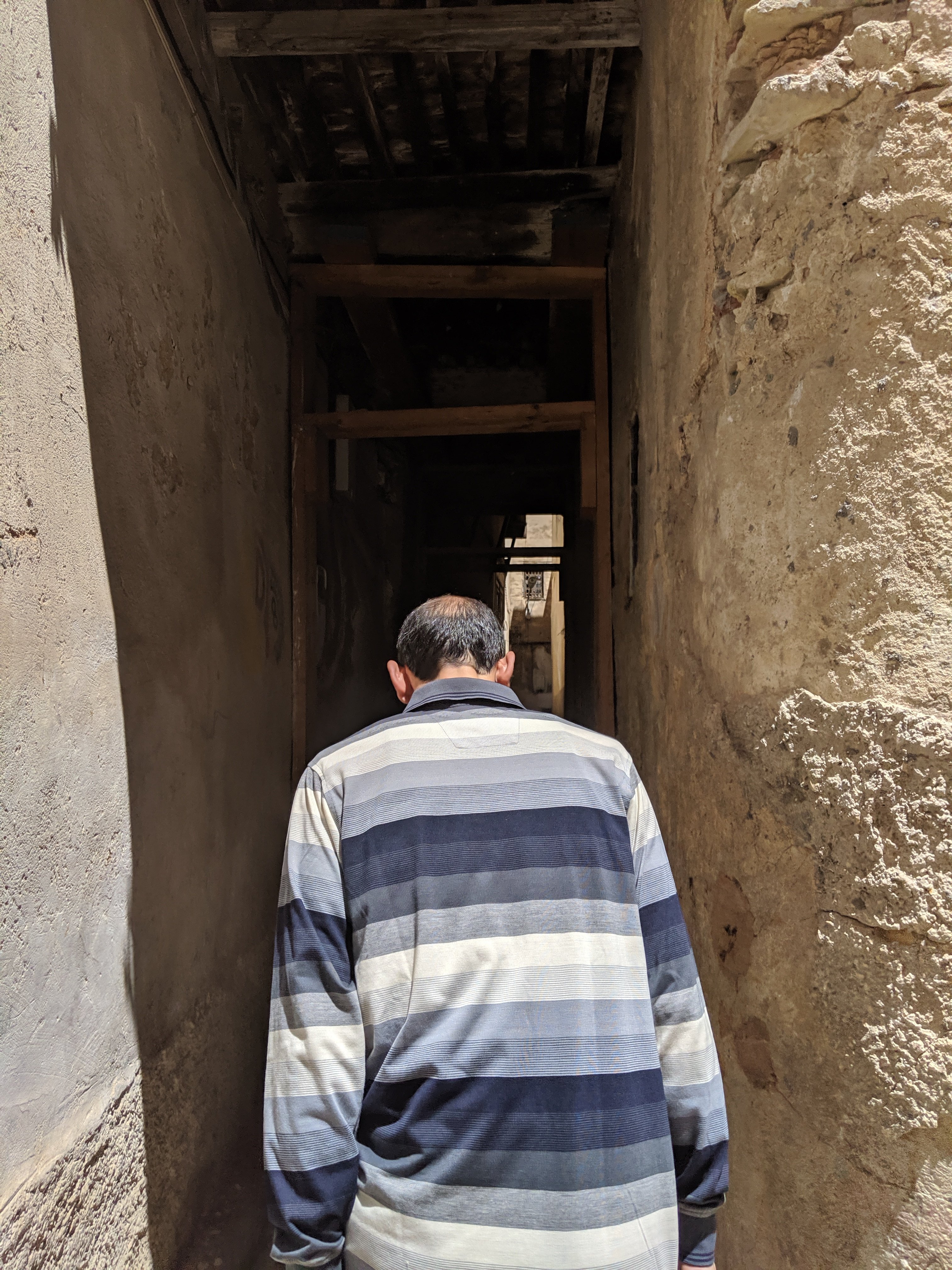 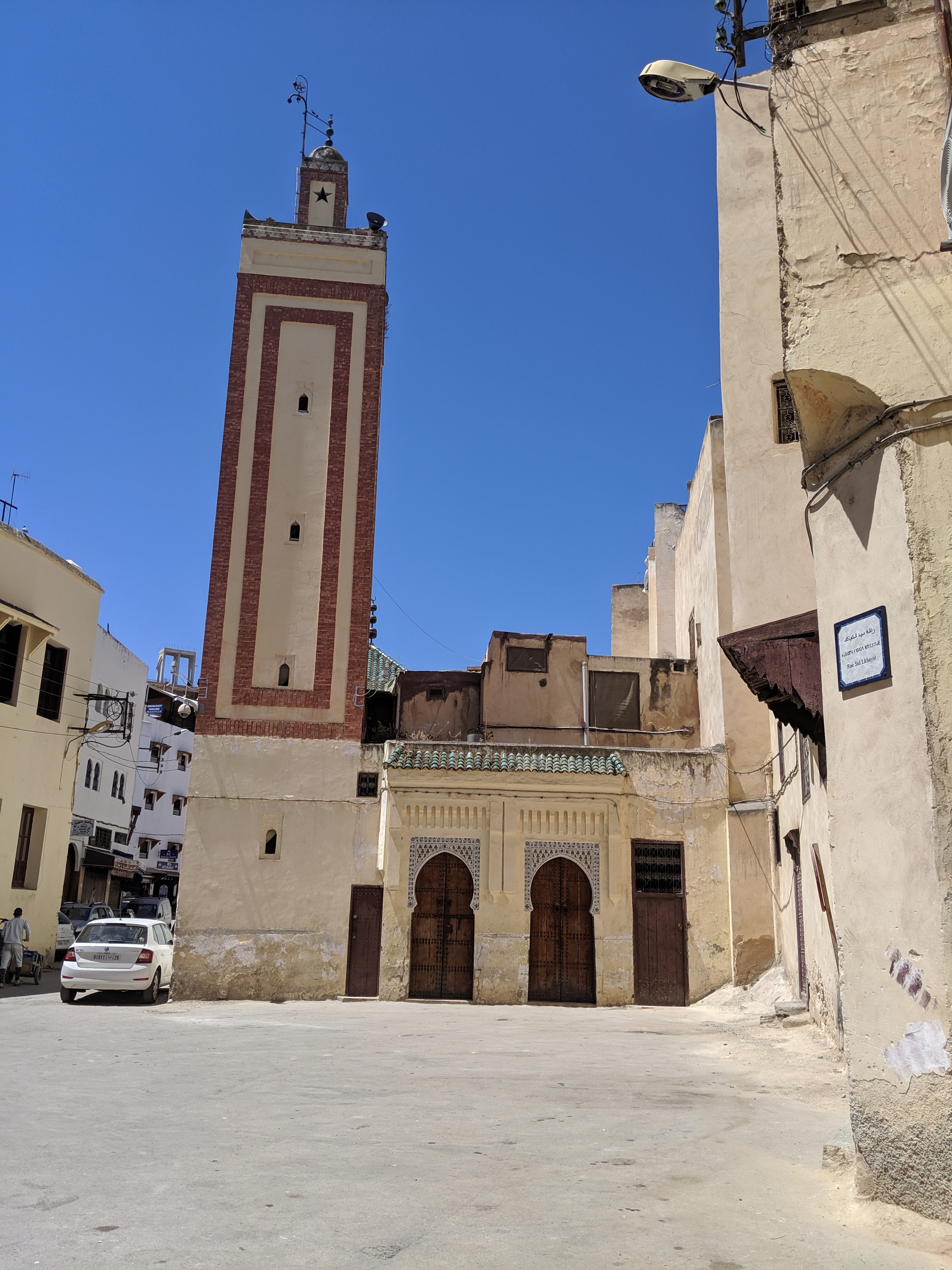 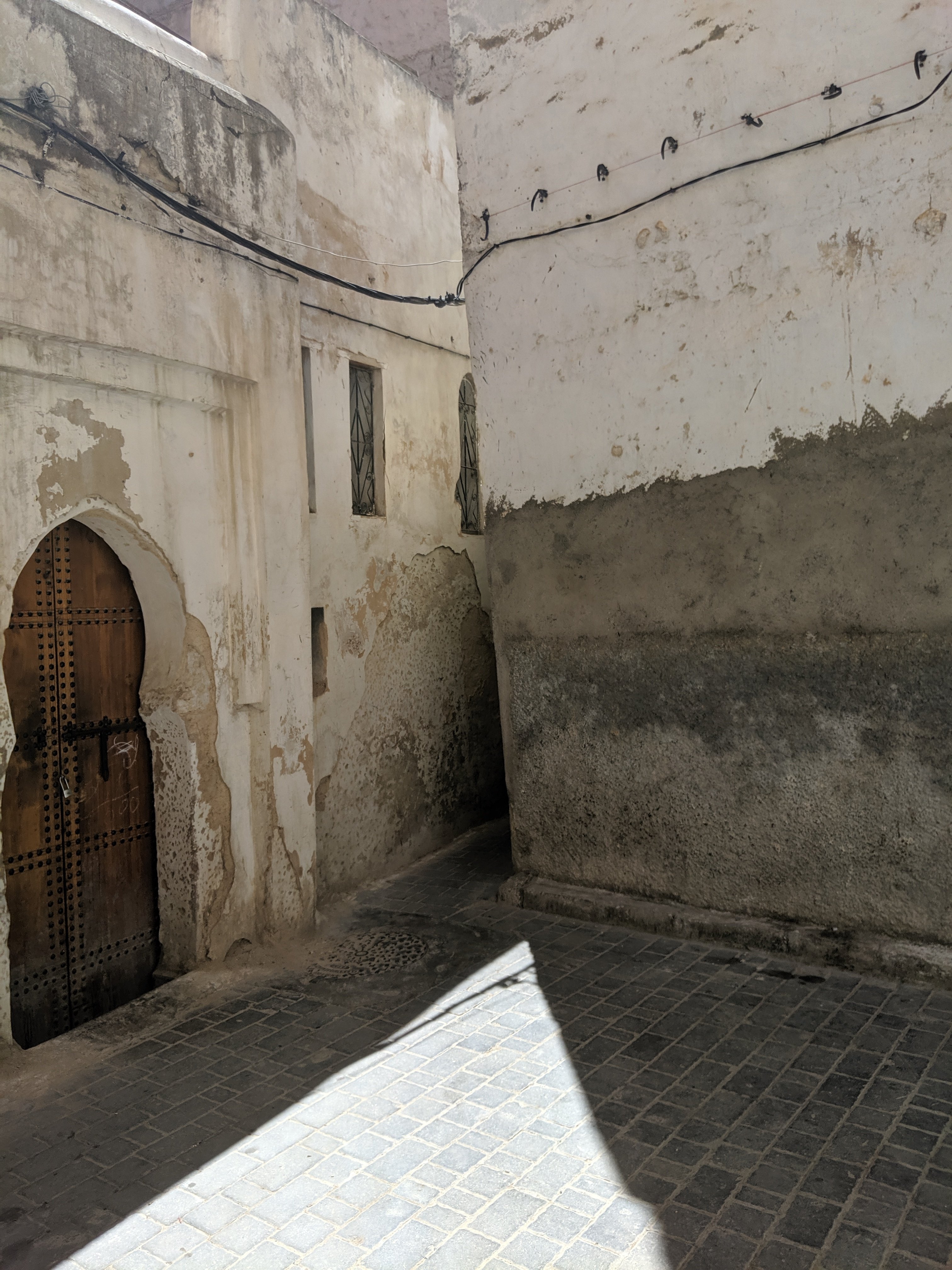 Muhammad told me that on this tour we would not be walking down the main tourist areas. We would walk down one of two “main streets,” and then take a narrow road that would lead to a special store Muhammad had in mind. He likewise stopped at least twenty times to have conversations with vendors, buy cantaloupe, or have an angry conversation on a phone. It was definitely an immersive experience, and I would recommend it.

I was taken to a tannery, and rug/blanket, jewelry, woodworks, and aragan oil stores. In each store a worker would give me an explanation of how they made their goods, before attempting to bargain with me until I bought one of their products. A Berber man at the rug/blanket store insisted that he would never attempt to “hussle” me into buying a product. He then gave me a lavish display of carpets, laying them down in front of me and urging me to walk on them with my bare feet, proceeded to give me mint tea with “no strings attached” while explaining their various shipping methods all around the world, and vividly described how wonderful a 3000dh rug would look in my living room. I admit it, I almost cracked. 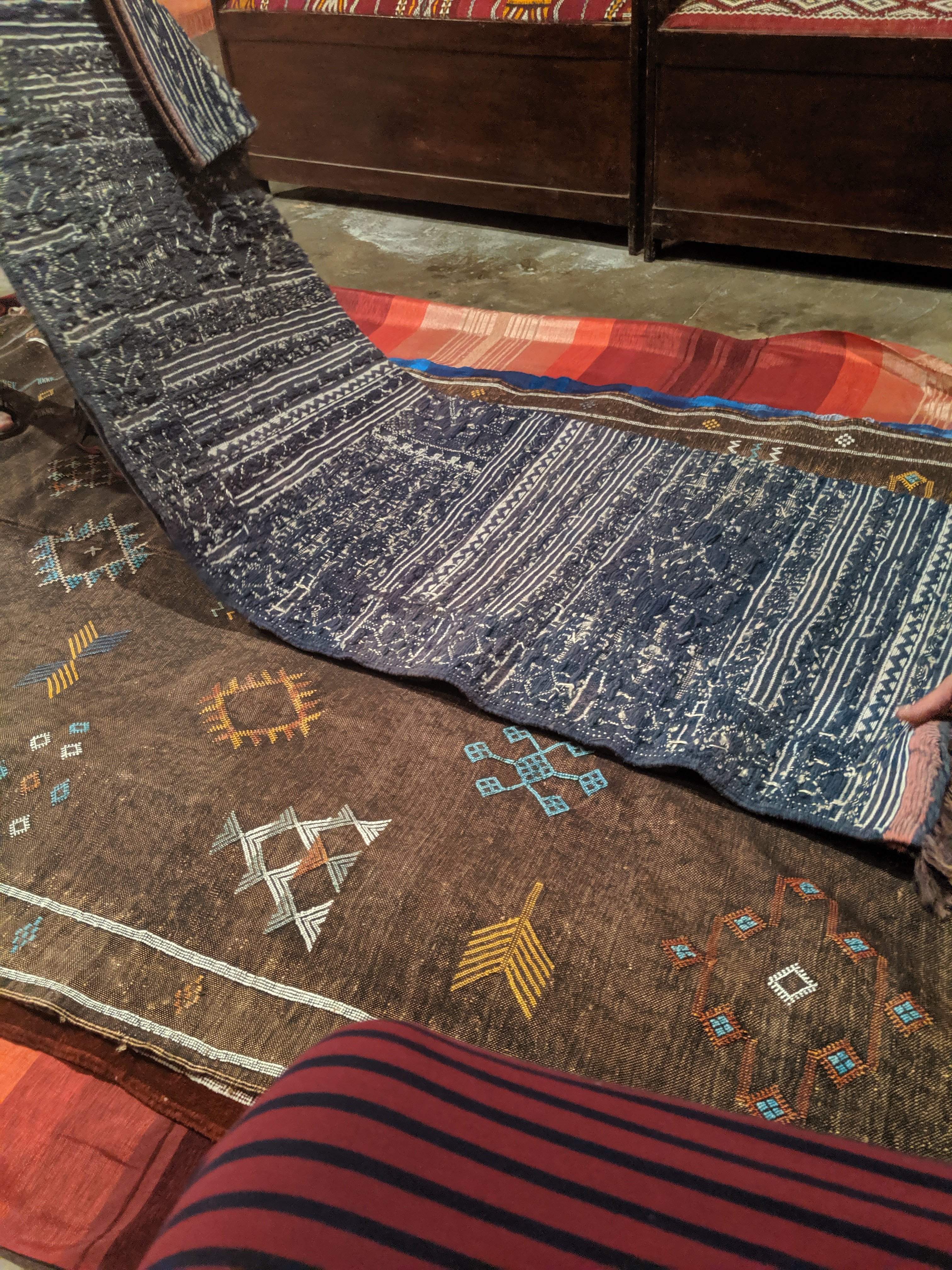 In the jewlery store, I was told that every necklace and earings would make me look like a “princess.” I bargained here with the owners for fun, seeing how much they inflated their original prices. I read that a general rule is to take their original price and subtract 30% for a fair deal (first you should try 50% of the price and then finally accept 30%) I would say this method holds true.

I do admit, in this store I did crack. I’m somewhat of a sucker for flattery and silver. 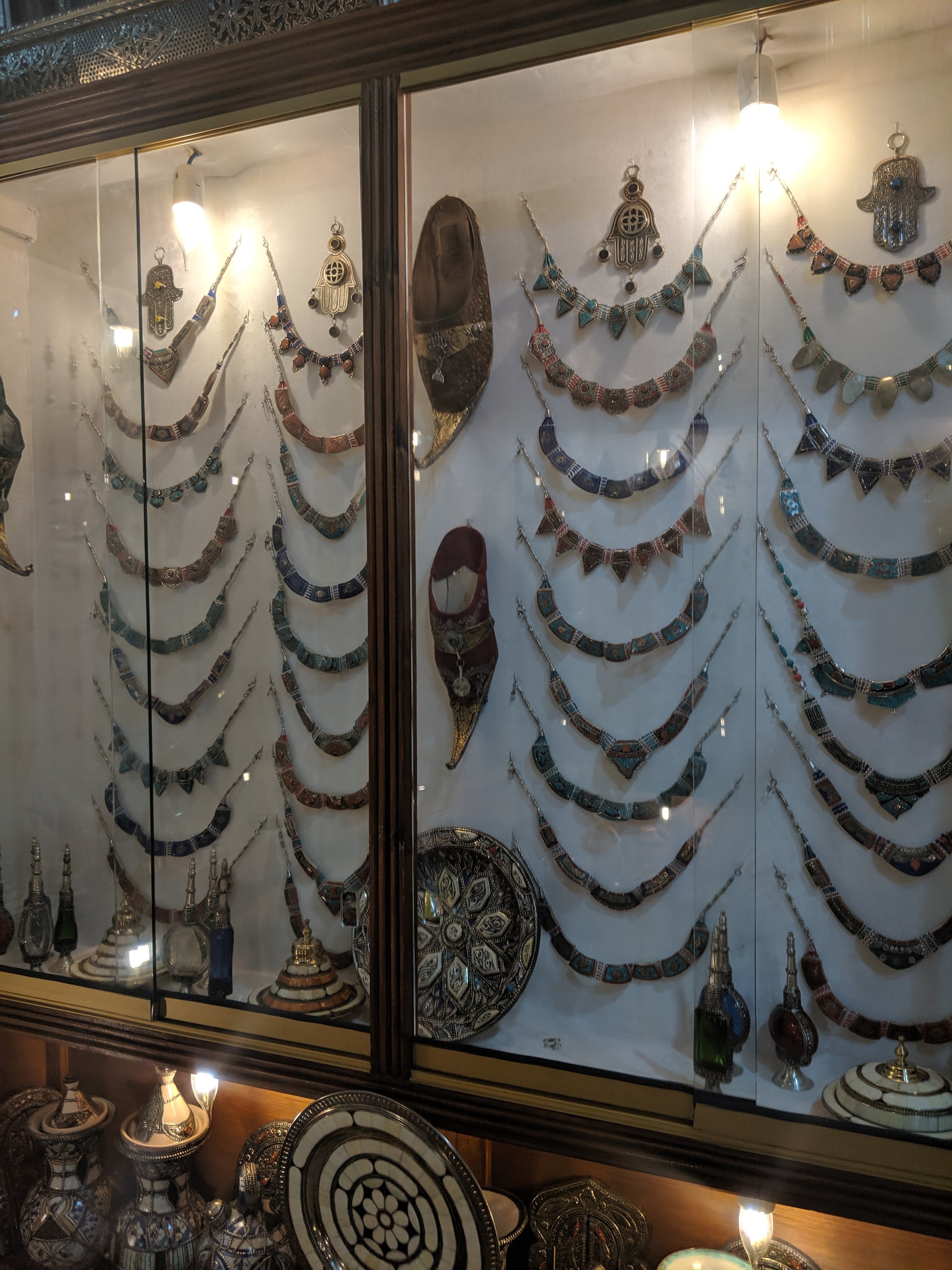 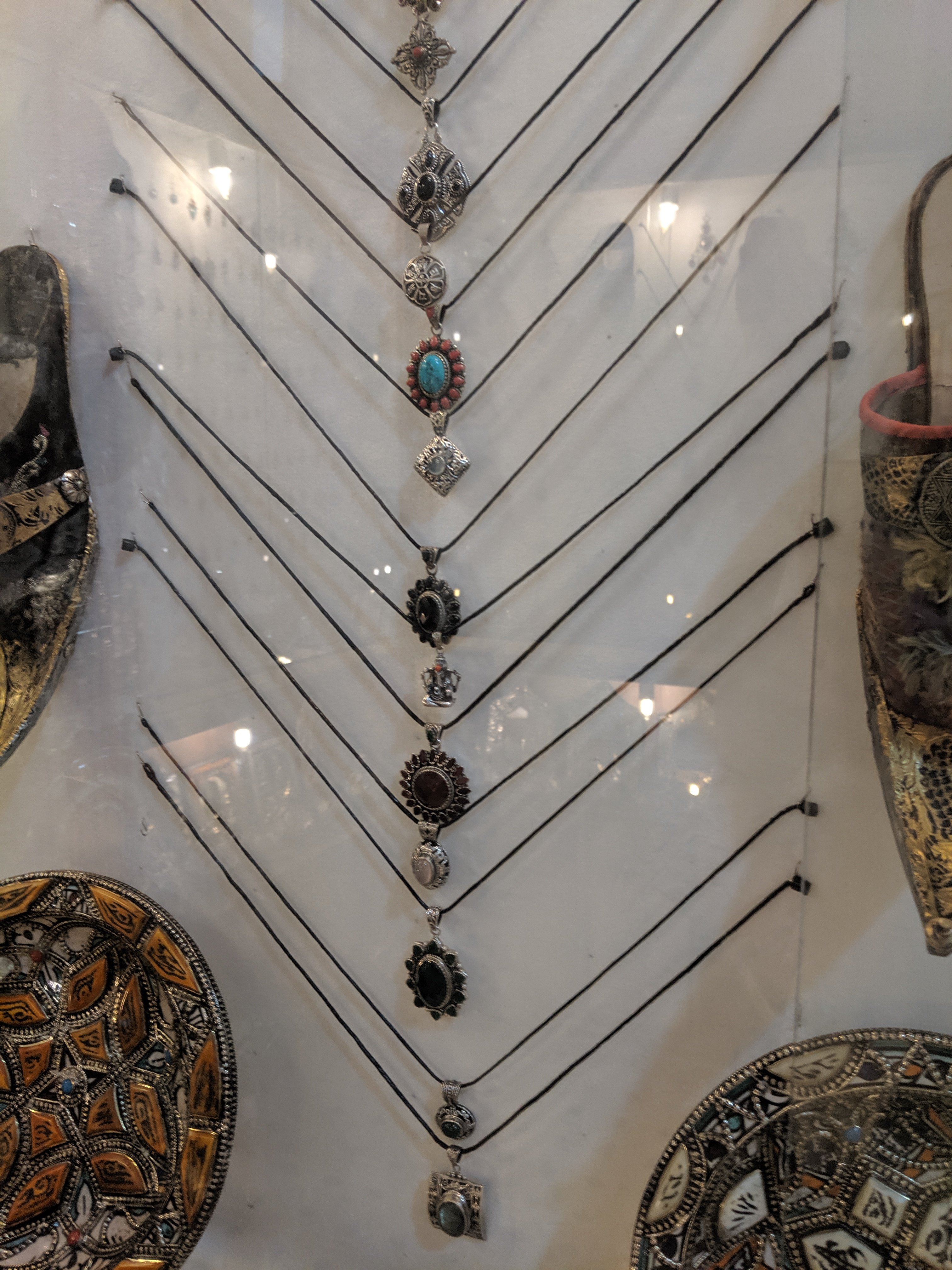 The atmosphere in Moroccan stores is different from those in America, where you are just free to walk around a store. From my short time experiencing Moroccan stores, if you show interest in a product for more than five seconds, the workers are immediatly at your wide offering you different prices. When you are walking down the streets and catch the eye of a vendor, it becomes their mission to sell you a bunch of bananas, a live chicken, or a djellabah.

Before coming to Morocco, I was very worried about how my dress would separate me as a tourist from the locals. I had read some rather horrifying blog stories about solo-women travellers, saying that they were harrassed by men and street vendors. Though I know being with a male guide significantly lowered the attention I got, I felt comfortable walking around in a skirt and long-sleeved shirt. I had purchased several pieces of clothing that I thought were “traditional” Moroccan clothing, including a hijab, because I was afraid of not blending in. However, after my first day and tour of the medina, I feel comfortable walking around without a head scarf and in traditional clothing…at least in the touristy areas when I’m not alone. 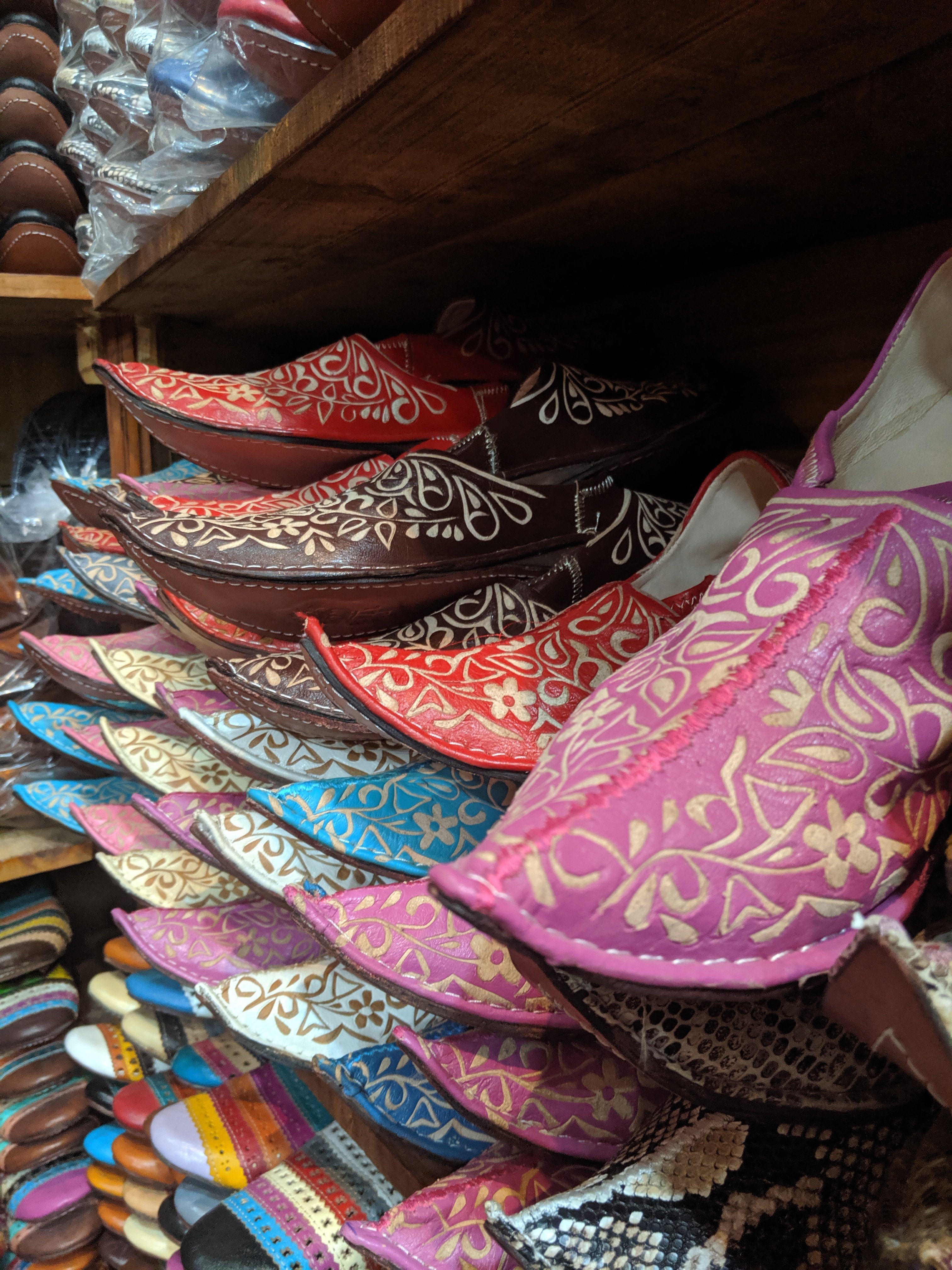 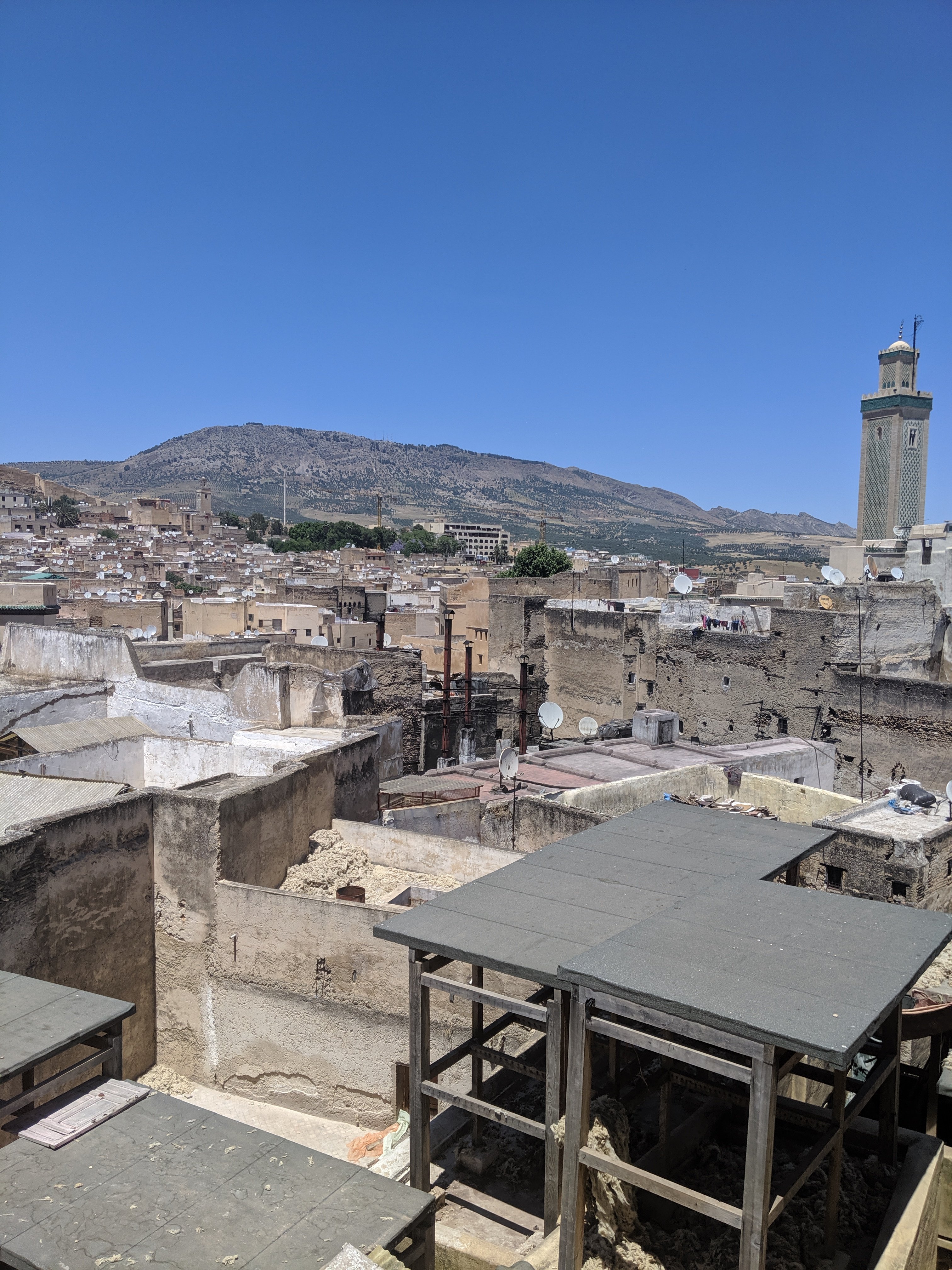 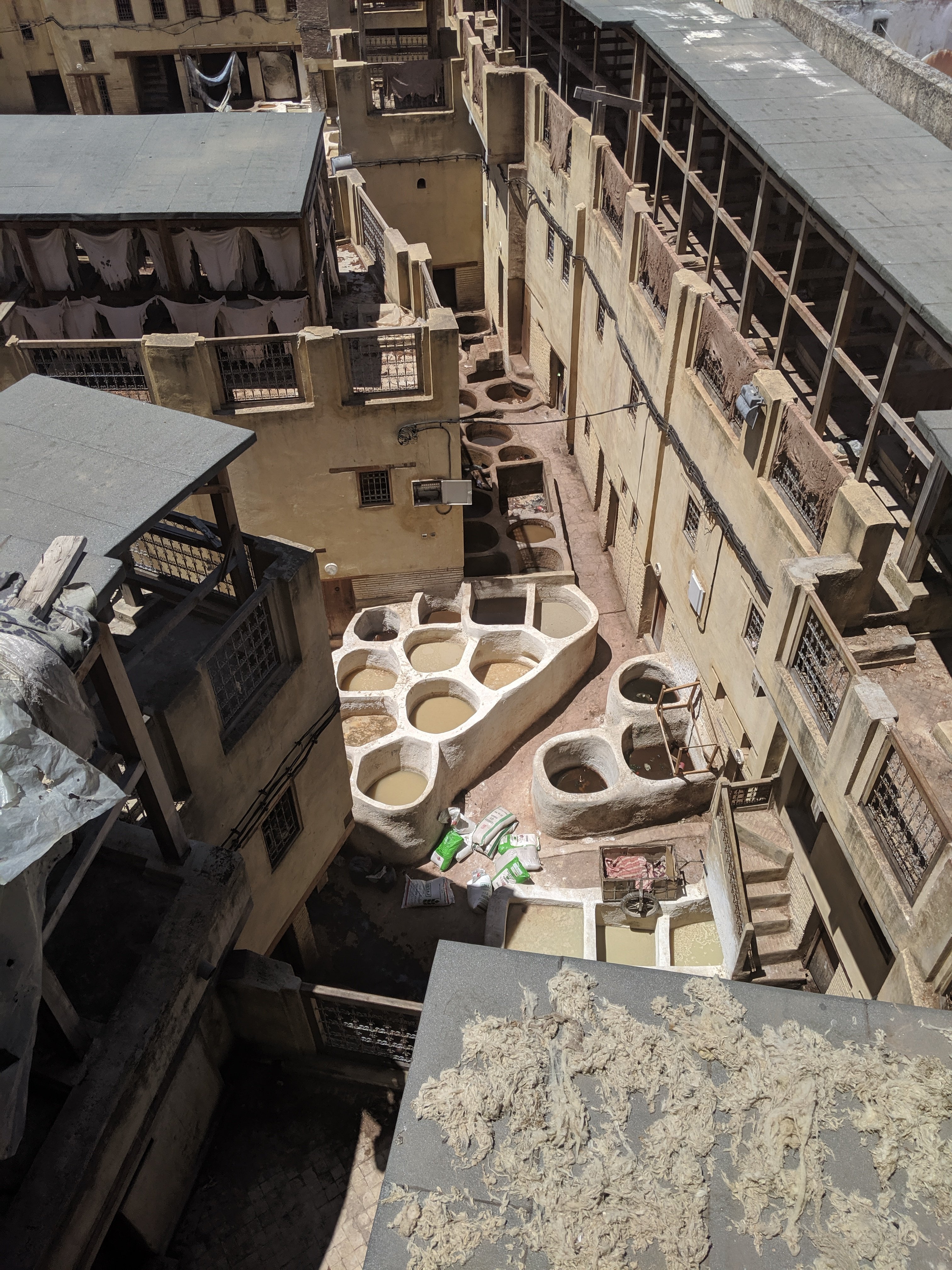 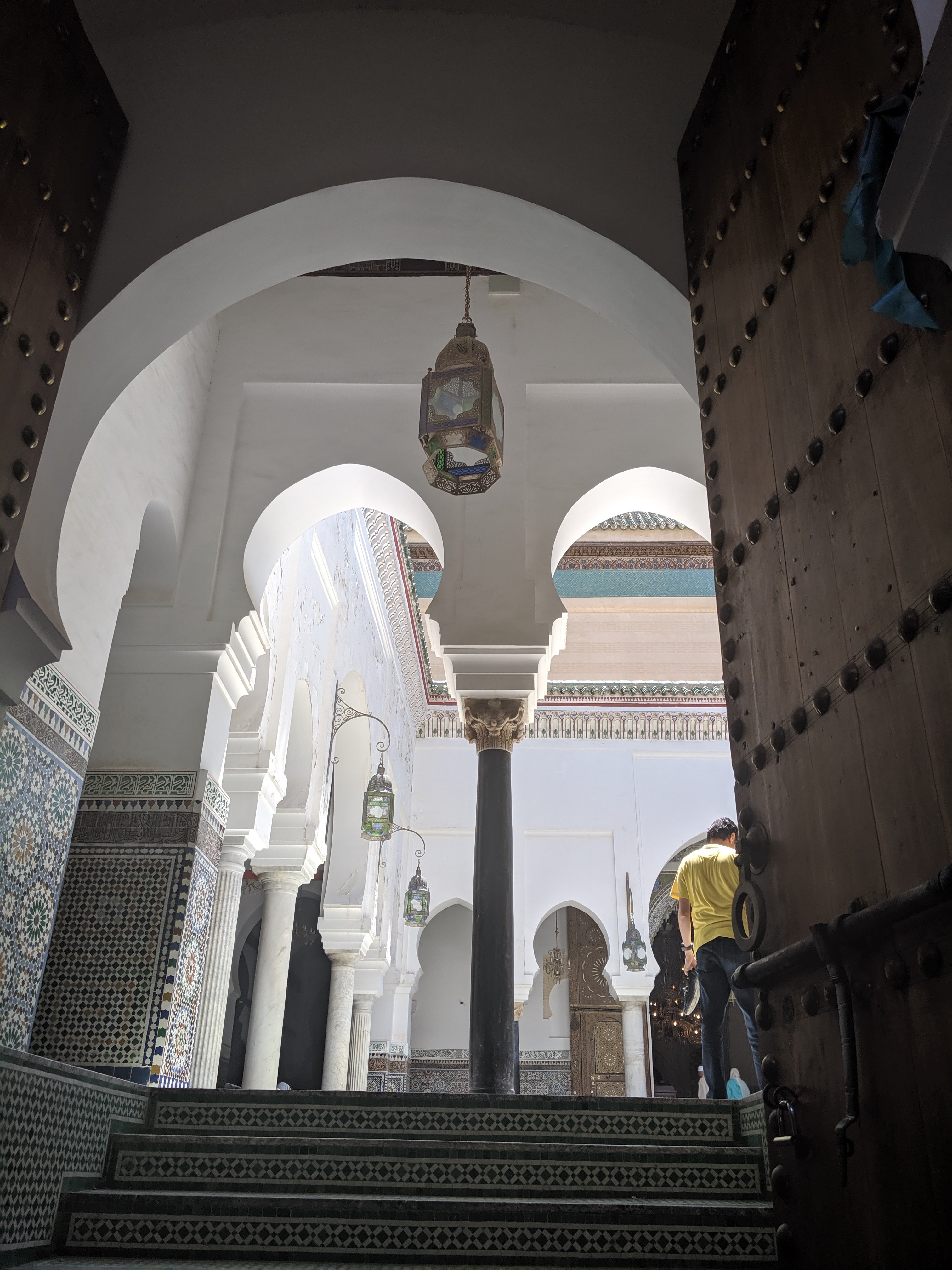 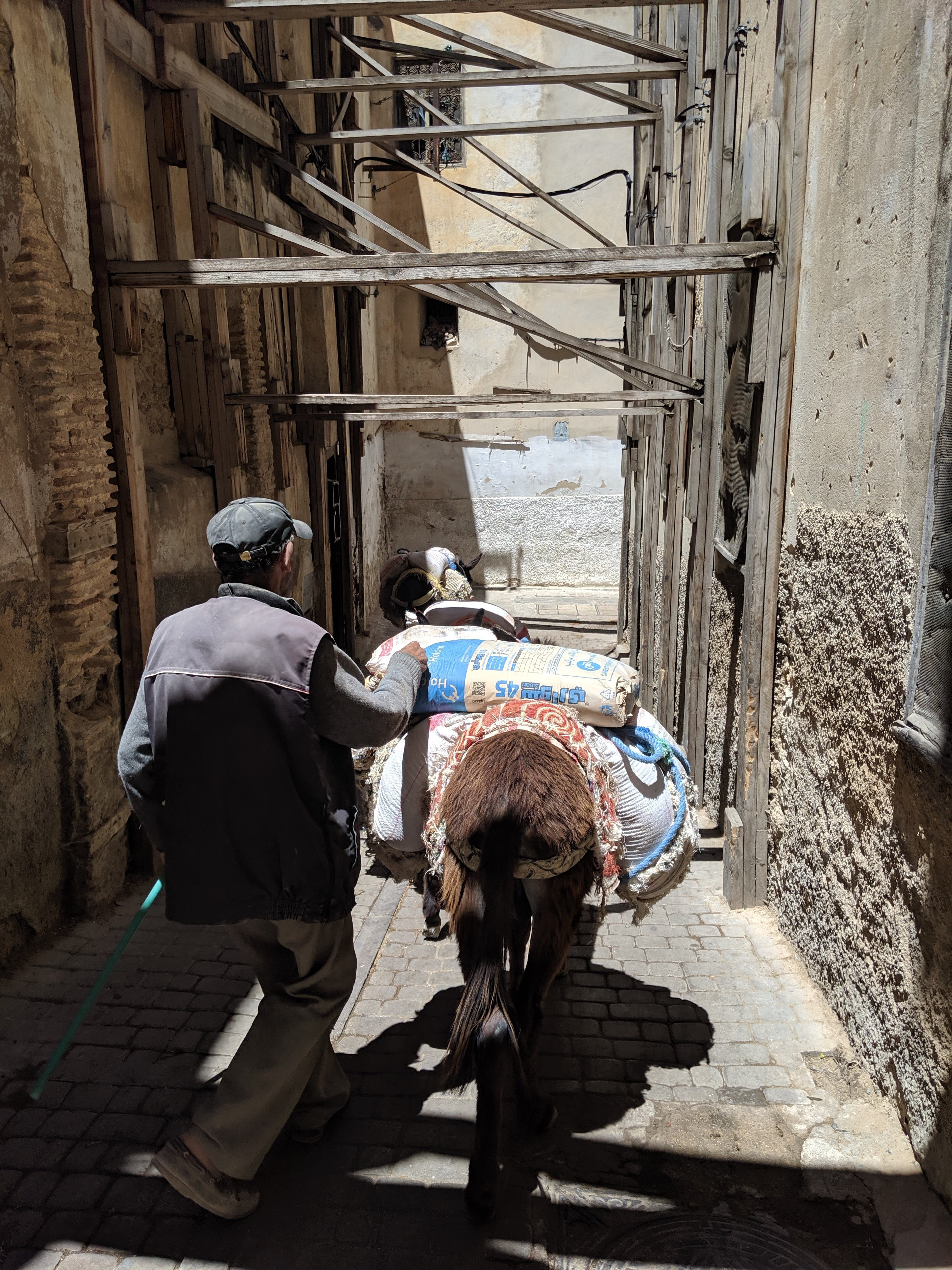 Fes truly seems like it is a set from a movie. The medina contains more than 9500 streets and alleyways, most of which look somewhat the same (at least to a foreign eye). The locals take pride in the authenticity of their city, as it was built in the 9th century and still stands.

Thankfully I made friends with some British “chaps” and two girls from California, so I was able to to out and get some dinner (dinner isn’t served after dark due to Ramadan, and traveling alone in the dark is not advised).

One interesting thing I observed at night was that many of the restaurants had a similar set up to those in Europe, with tables and chairs all spread out around the store. However, there were absolutely no women dining outside. Only men. I’ve still yet to figure out why. 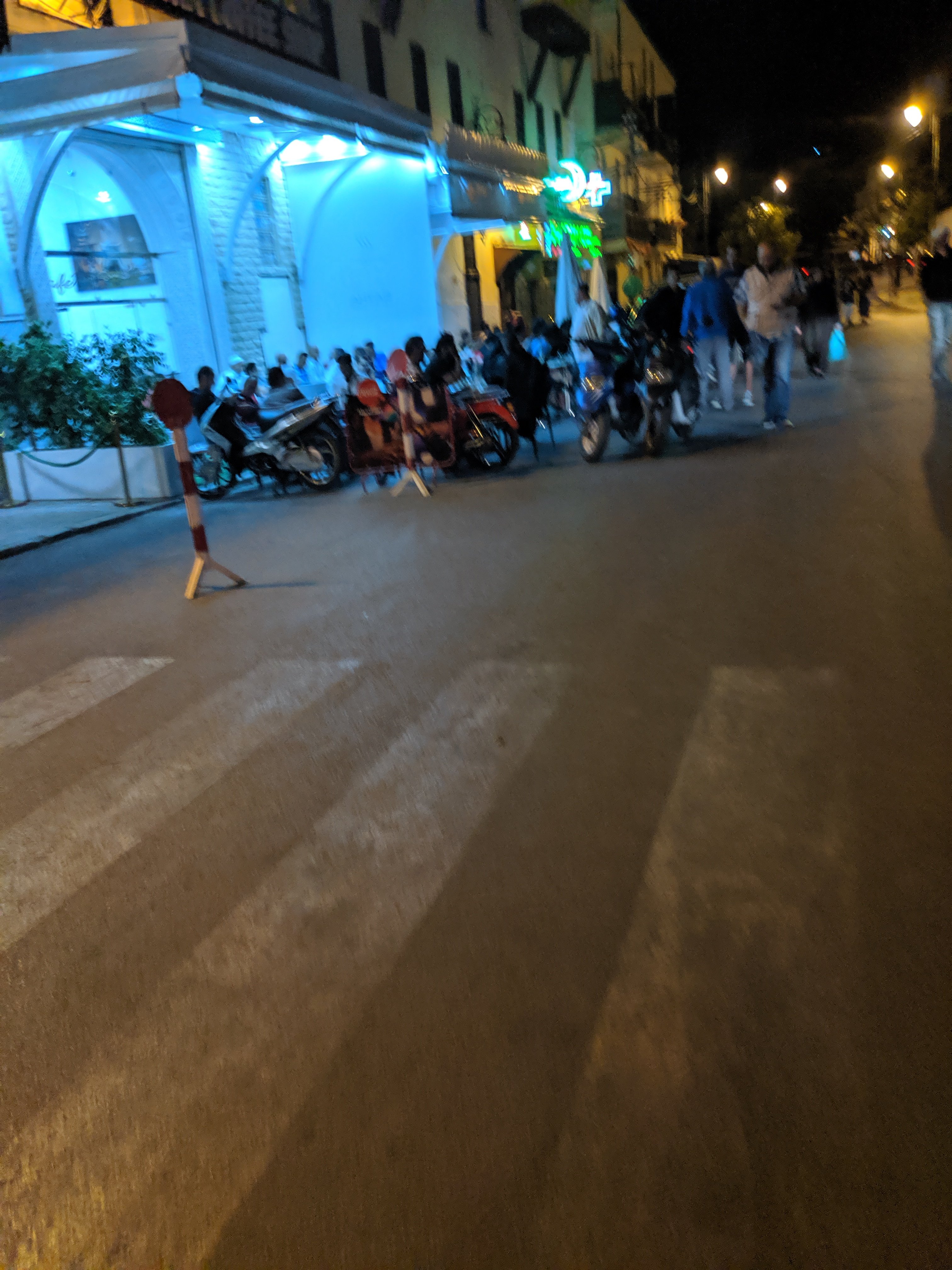 (This is a blurry picture, but I was in spy mode with my phone because I feared someone might try to snatch it).

At the restaurant I had a “camel burger,” so I can officially check that delicacy off my bucket list. 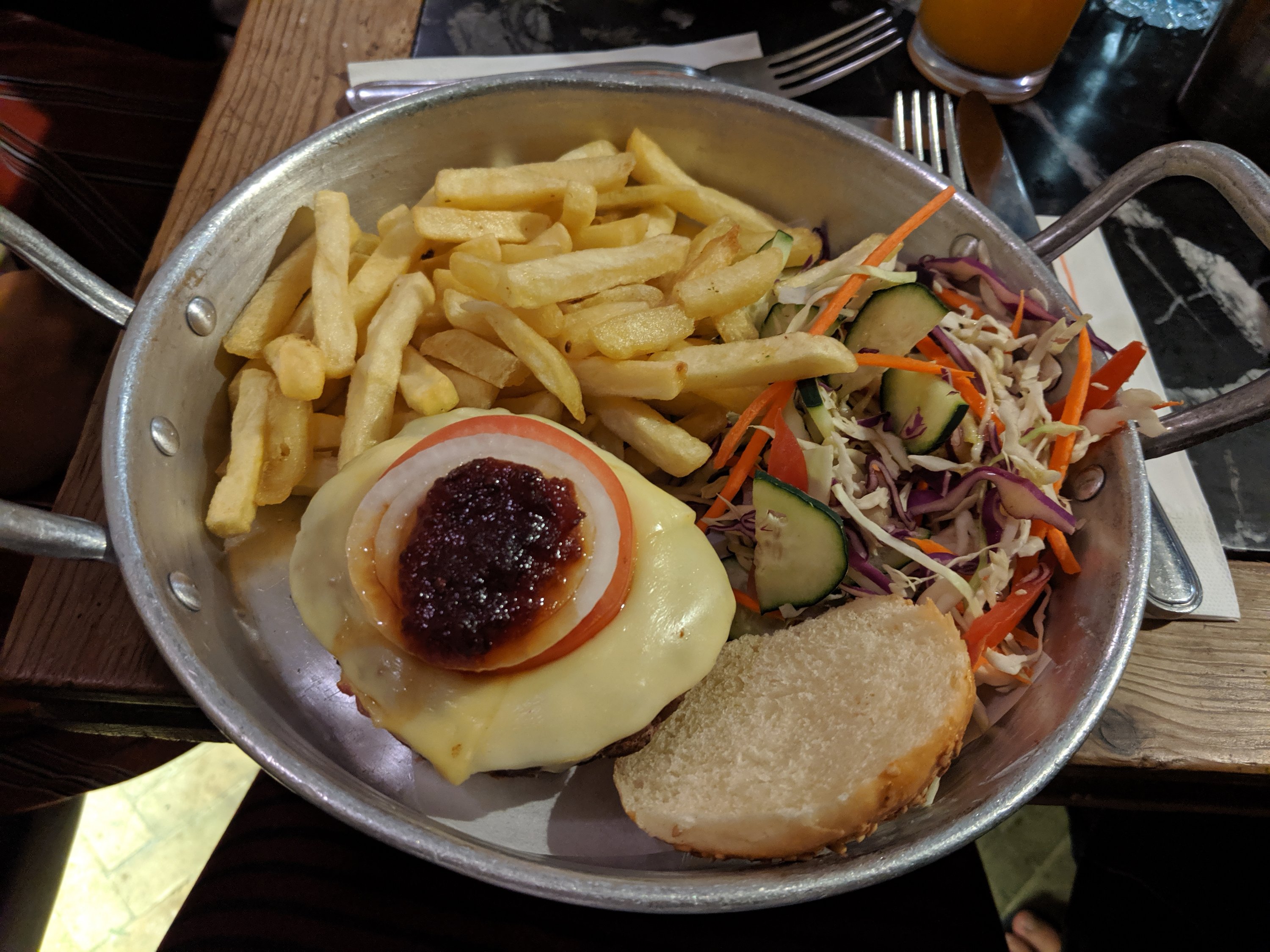 Tomorrow I’m going to explore the medina without a tour guide. My “mates” and I are planning our own little quest through the winding streets, and hopefully we won’t get too lost.

Overall I’ve had a rather gratifying first day in Fes…and haven’t killed any of the hostel’s turtles. Win win. 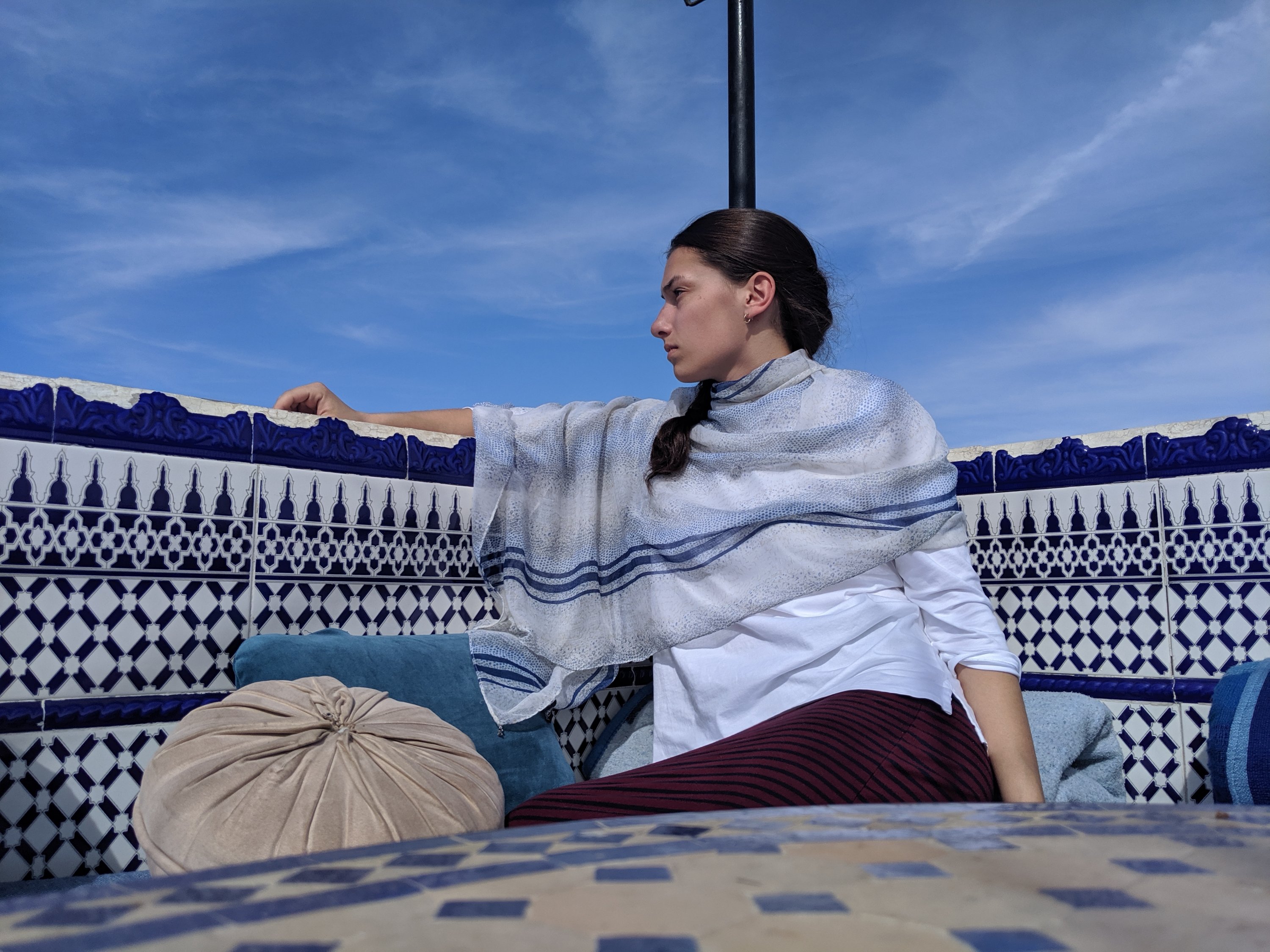 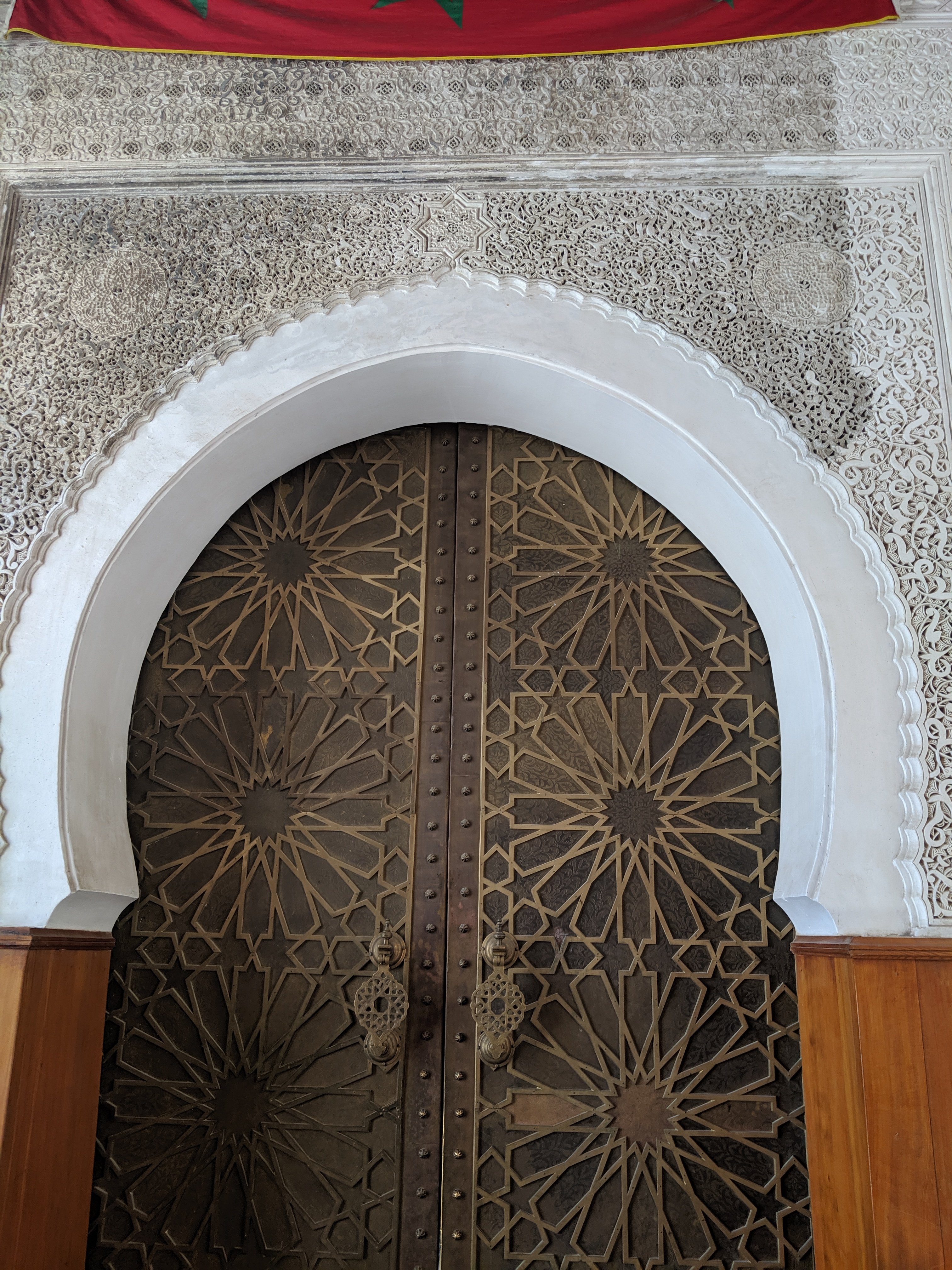 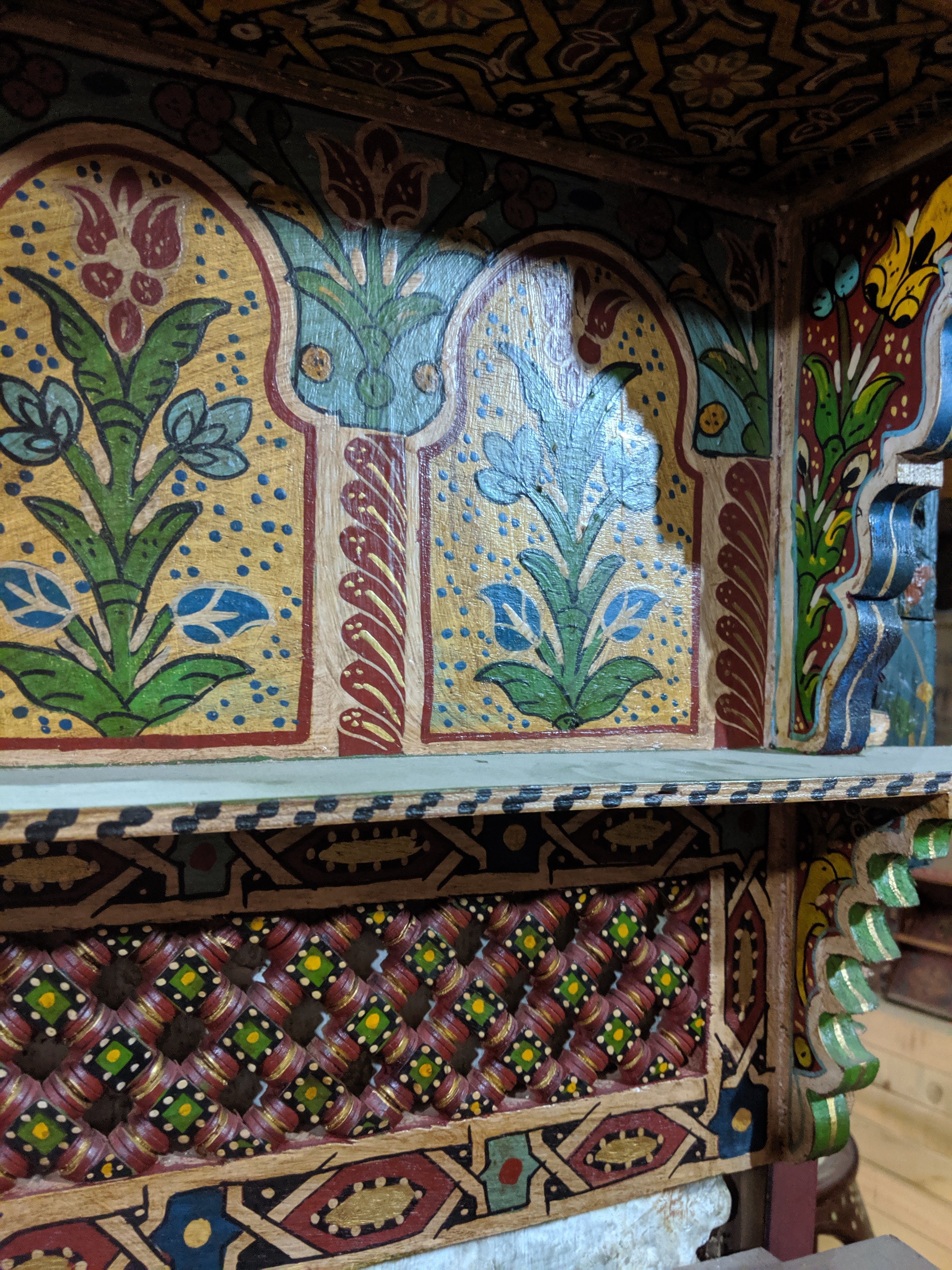 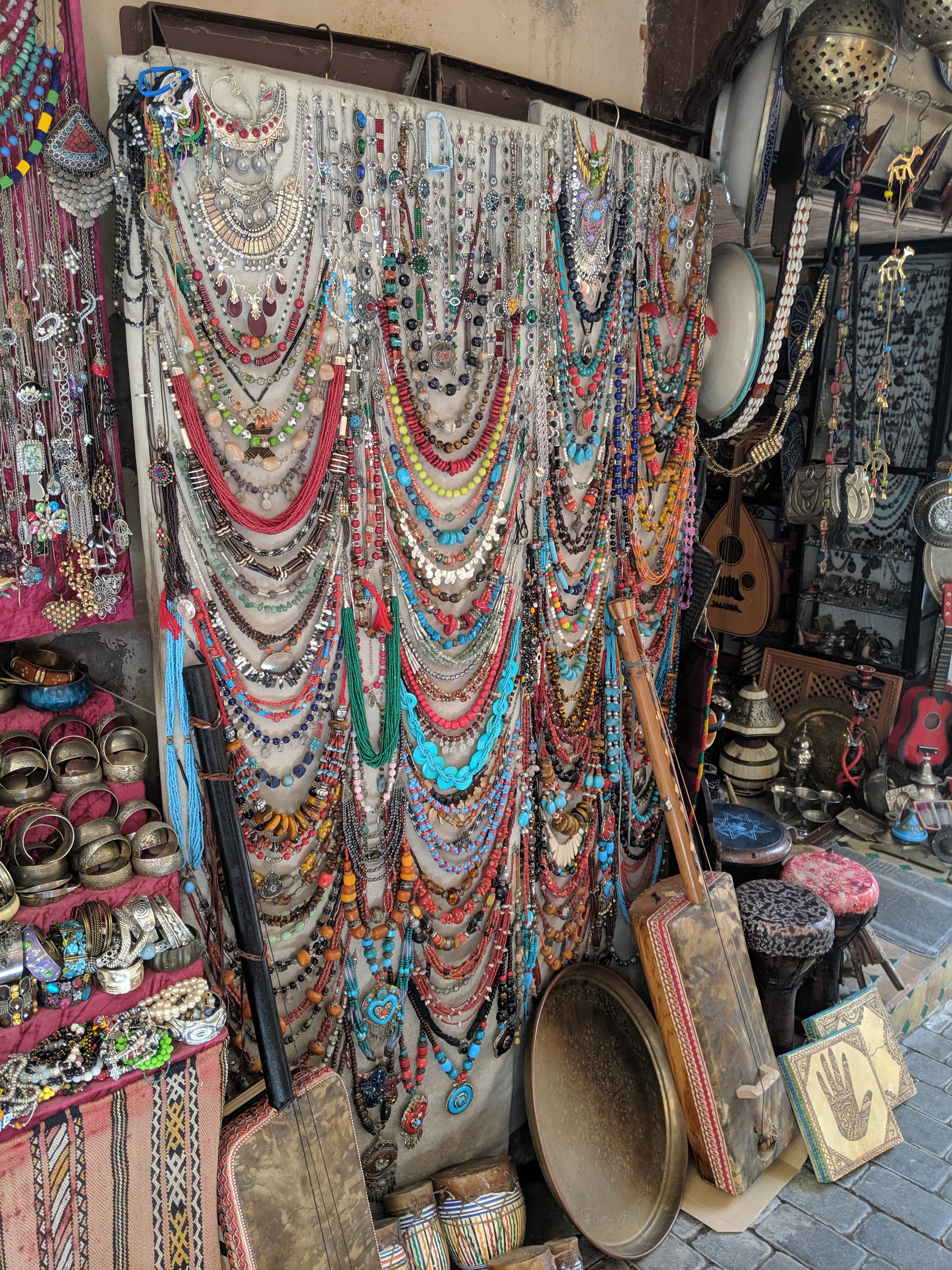 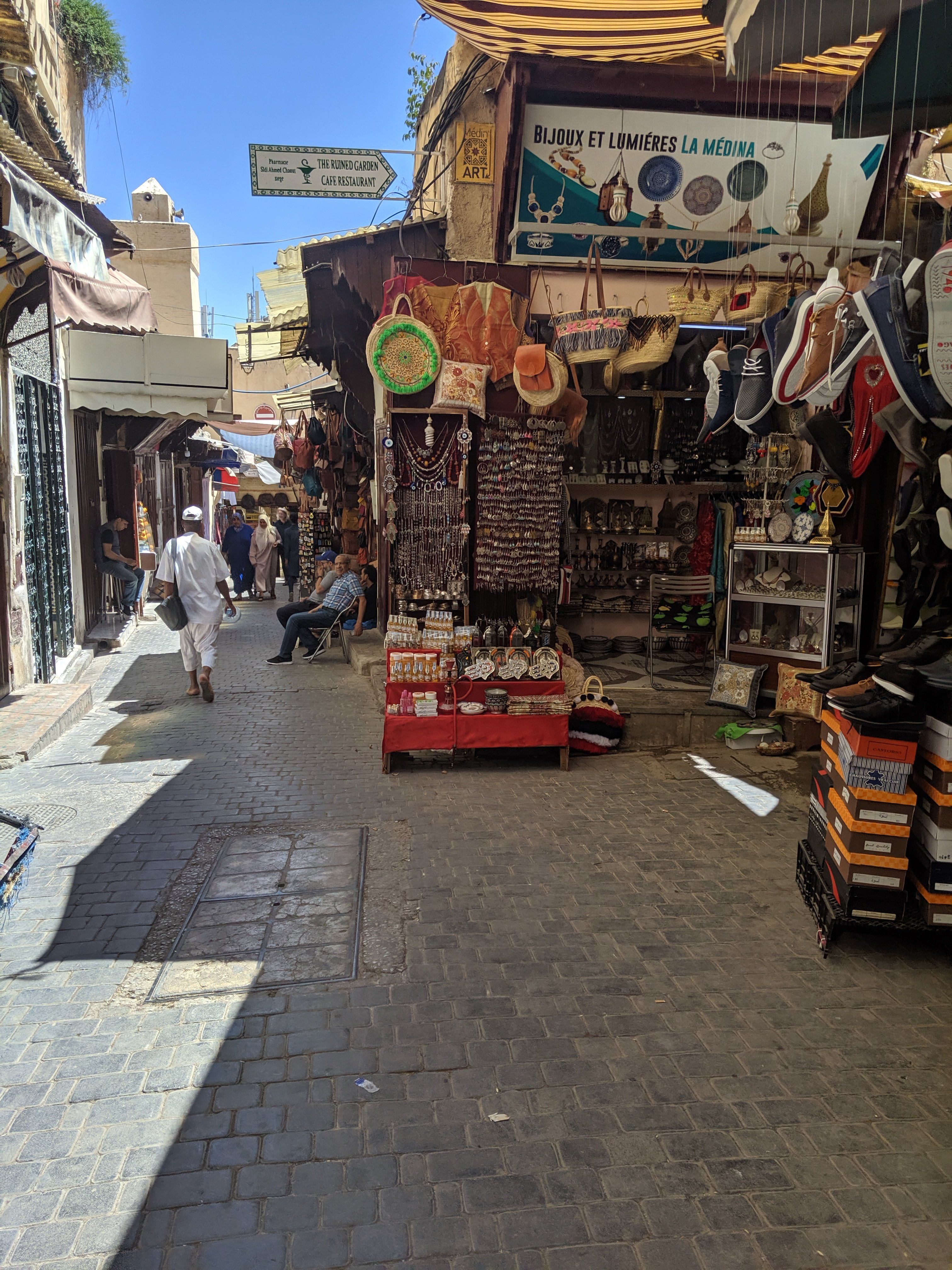